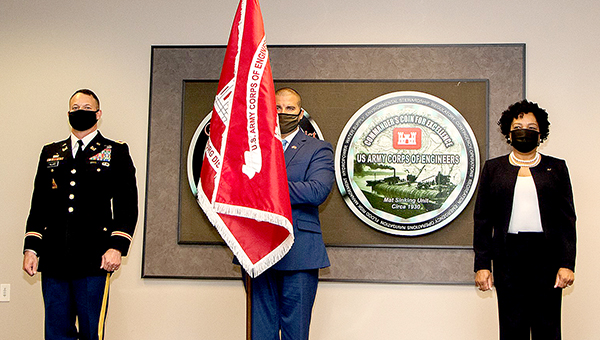 The new district flag is one of the first to be uncased, or formally unveiled, across USACE. Also referred to as colors or unit standards, the flag represents the district’s lineage since it was permanently established in 1884. The colors also symbolize past and present employees’ contributions to the district and the nation. Previously, only USACE divisions were authorized their own colors.

“Every unit regards their colors with a sense of community, shared pride, and commitment to the mission,” Hilliard said. “These flags represent the victories of all who serve under them, whether they’re soldier or civilian, and we’re proud to finally have a visible representation of our dedicated personnel.”

Traditionally, unit flags served as a rallying point for soldiers during battle and helped maintain cohesiveness. Commanders entrusted unit flags to their most trusted officers until U.S. Army regulations changed in 1813, after which the duty was performed by color sergeants or sergeants major. Colors are no longer used for identification on the modern battlefield, but instead as a tangible source of unit pride during official ceremonies

JACKSON (AP) — A coalition of conservation groups is suing the U.S. Army Corps of Engineers over a massive flood-control... read more