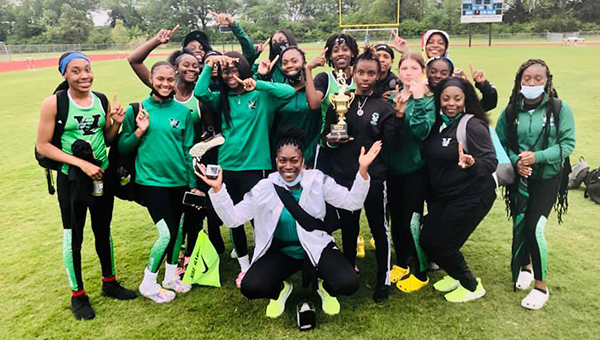 The Vicksburg Missy Gators spent as much time on the podium as they did on the track Friday afternoon.

The Missy Gators won six events, finished second in six others, and rolled to the team title at the MHSAA Region 3-5A track meet at Canton High School.

The half-dozen first-place performances allowed Vicksburg to rack up 149 points and claim the team title as well. Callaway was second, with 116 points, and Ridgeland was third with 91.

Just as important as the victories were the number of athletes that the Missy Gators placed in the top four of their various events. Ten athletes and four relay teams accomplished that feat and advanced to Round 3 of the MHSAA postseason, the North State meet on April 24 at Center Hill High School.

Hall qualified in the high jump and 300 meter hurdles, in addition to the long jump. Shaniya Walker also qualified in two events, the 200 and 400 meters, as did Sha’Kyria Allen in the shot put and discus.

In the boys’ meet, Jaevon Walker won the 300 meter hurdles in 41.38 seconds and finished third in the 110 meter hurdles to advance to North State in both events.

Vicksburg’s 4×100 and 4×100 meter boys’ relay teams both finished third to advance to North State as well.

Warren Central has punched its ticket to the MHSAA Class 6A baseball playoffs. Jack Wright struck out six batters in... read more