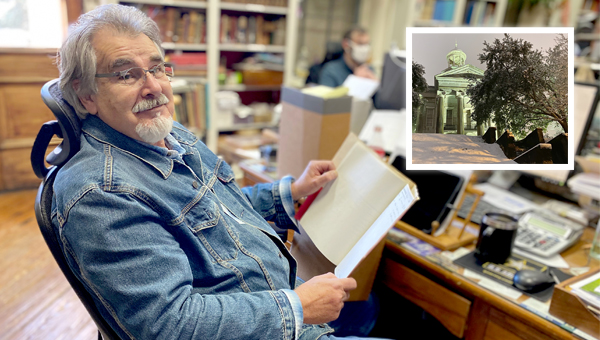 The Old Court House Museum is full of thousands of artifacts found from Vicksburg’s past.

These items are the eyes through which historians see and understand the past.

Bubba Bolm is a Clarksdale native, but he moved to Vicksburg in 1982. He treats Vicksburg’s history like it is his own, and he can tell the story of practically every item in the museum.

“We preserve that history,” Bolm said.

People have brought in kitchen utensils from the 1800s, Native American teapot vessels from 800 to 1600 A.D., and even cannons used in the Civil War. But what is the process for authenticating a piece of history like that?

Well, if it happens to be in the National Military Park, contact a park ranger. It is against the law to take any artifacts away from the property.

If it is found on your property or even public property, contact the Old Courthouse Museum. Bolm has a collection of thousands of books to look through in order to verify any items brought in.

Many items are discovered when a person passes away, and the family is left to go through their possessions.

“Most items in the museum come from families held for years and years,” Bolm said.

In 1983, Mrs. Homer (Lillian) Smith brought in a teddy bear — one of the first of its kind. The bear had been held within her family for years, but it carried a story that she felt needed to be told.

When President Theodore Roosevelt visited Vicksburg in 1907, he was greeted by a young boy named Homer Smith. Smith presented the president with a bouquet of flowers.

The last time President Roosevelt had visited Mississippi was merely 30 miles away in Onward in 1902. He participated in the infamous hunt led by locals. They trapped a bear for him to kill but viewing that as unsportsmanlike, he refused. The story hit the papers and the famous “teddy bear” came about.

As President Roosevelt returned to Washington in 1907, he remembered his welcoming bouquet of flowers in Vicksburg, Miss. Homer Smith soon received his very own teddy bear in the mail. This bear can now be seen at the Old Courthouse Museum.

One item Bolm receives calls about fairly often is the newspaper printed during the Siege of Vicksburg. Resources were few and far between during the siege, and paper was no exception. Vicksburg Daily Citizen Editor J.M. Swords printed the newspaper on pieces of wallpaper. A pattern can be seen on the back of each one.

The most notable edition was the one printed on July 3, 1863. Only 50 copies were printed, and the museum has four of them.

During a reunion, copies of these were made and sold, so it is more difficult to authenticate each one brought in. Bolm contacts the Library of Congress to determine if each copy brought in is an original or, in fact, a copy.

Anna Kate Doiron is a 2017 graduate of St. Aloysius and is a senior at the University of Mississippi majoring in integrated marketing and communications. Anna Kate has worked as a reporter for The Vicksburg Post between the fall and spring semesters. She is also the founder, and lead baker, for Macarons by AK.

Profile 2021: A glimpse of the ‘grande’ Hotel Vicksburg

She was the “grande dame” of the city. Standing taller than any other building between Memphis and New Orleans, at... read more