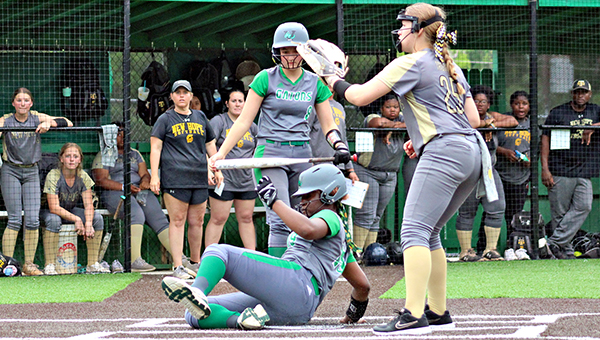 Backed into a corner, and with their season on the line, the Vicksburg Missy Gators fought their way out to take a second-round MHSAA Class 5A softball playoff series from New Hope.

Now they just have to wait and see if they get to keep it.

The Missy Gators won Games 2 and 3 Tuesday, by scores of 6-2 and 9-6, to win the best-of-three series 2-1. Late in Game 3, however, New Hope coach Casey Finch-Halford lodged a protest over the game balls that were being used. The Mississippi High School Activities Association will consider the protest and issue a final ruling Wednesday morning.

“It’s another thing we can’t control. What we can control is that we stayed up, and we stayed ready, and we went and finished this ballgame. If it goes to somebody else’s hands, then it goes to somebody else’s hands,” Vicksburg coach Brian Ellis said. “It’s (waiting for a decision) going to be kind of rough. It’s going to be even rougher if they take this away from these girls.”

Vicksburg (9-13) won Game 2 of the series, the first of Tuesday’s doubleheader, 6-2 to force a deciding Game 3. Kellisia Walker hit a two-run double and Lexi Kistler a two-run single to put the Missy Gators ahead 7-1 through four innings, and then things got really wild.

After New Hope (12-10) cut into the lead with two runs in the fifth inning, Kistler belted a two-run home run over the left center field wall to put Vicksburg ahead 9-3 in the top of the sixth.

“That first one I hit I thought it was going to be over, but as soon as I hit that one I knew that felt good. I was hitting some in practice so I wanted to some in a game. Thank goodness,” sais Kistler, who went 3-for-4 with four RBIs in Game 3.

Seconds after Kistler was mobbed by her teammates at home plate, however, Finch-Halford was out of the dugout to talk to the umpires. She said she had noticed the inning before that something seemed wrong with one of the game balls but hadn’t had a chance to inspect it.

After a delay of about five minutes, it was announced that New Hope was playing the game under protest. Pictures of the questionable balls were taken and sent to the MHSAA, and the home plate umpire kept one with him when he left the field.

“The balls are not Wilson Championship Series and they do not have the National Fast-Pitch High School Association stamp on them. So if (the MHSAA) does approve that’s a legal ball then I understand, but as a coach fighting for their team I have to do the best to put our kids in the best situation possible,” Finch-Halford said. “The core stamp is also not the same core stamp. It’s just my job to take care of my kids in that aspect.”

Ellis defended the game balls used, saying they were the same ones that his team has been using all season — including through nearly two full games Tuesday — and that they had been approved by the umpiring crew at the start of Tuesday’s doublheader.

Ellis added that there were several other procedural issues that might work in Vicksburg’s favor even if the protest is upheld.

“There’s a lot of different things that can be looked at there. One is she protested that ball and it was two runs and the score was 9-6, so we’d still be ahead. The other side is, it’s the umpire’s responsibility to check that. We played one whole game with the same balls and then five innings,” Ellis said. “If they take this from my girls, I won’t be a happy camper. They cannot take this. They worked too hard today, and they don’t deserve something like that. The ball wasn’t a complaint when (New Hope) was scoring runs. It was a complaint after one home run.”

Finch-Halford disagreed with Ellis on at least the first point.

“You don’t get to just keep your score until somebody figures out you cheat. That’s actually not how that works,” she said.

New Hope scored three runs in the bottom of the seventh — Kensley Woolbright hit a two-run single and another run scored when the ball was misplayed in the outfield — but Vicksburg held on to win 9-6. Now it’s up to the MHSAA to decide which of them will, in fact, advance to the third round of the Class 5A bracket to face Saltillo beginning on Friday.

However it turns out, Ellis said he was proud of the way his team fought back after getting drubbed 11-1 in Game 1 on Monday.

“It was just a wild day. We got home after midnight (Monday) after our outing, and it wasn’t a good outing,” Ellis said. “I knew what we were capable of doing, and I just told them that whatever you do, reach deep down and find that pride for yourself, for your teammates, for your school, for your city and leave everything on this field. And you can sleep tomorrow. Win or lose, just play hard, and we did more than that.”

Warren Central’s baseball team has enjoyed a late-season surge heading into the MHSAA Class 6A playoffs. It feasted on a... read more