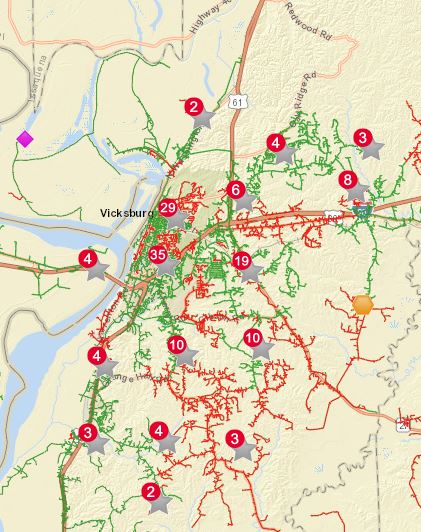 This afternoon, a squall line packing heavy rain and up to 60-70 mph winds cut through Warren County Tuesday dropping trees and power lines and leaving more than 9,000 people in the county without power.

As of 9 p.m. Tuesday evening, 7,285 Entergy customers in Warren County are still without power.

“We do have a lot of damage,” Entergy Customer Service Representative Sheila McKinnis said. “We have gotten on what we can and we are going to do what we can tonight with what we have. Tomorrow we will have more crews coming in to assist with the damage.”

“I want to commend the citizens of Vicksburg for their patience as Entergy Mississippi works to restore power following the severe weather event that moved across our state earlier today,” he said. “City crews are continuing to work around the clock to clear streets of debris and repair traffic signals. Thankfully, there have been no reported injuries associated with today’s severe weather. Stay safe, Vicksburg.”

The Vicksburg National Military Park has reopened access to the outdoor area of the USS Cairo, the African American Monument... read more