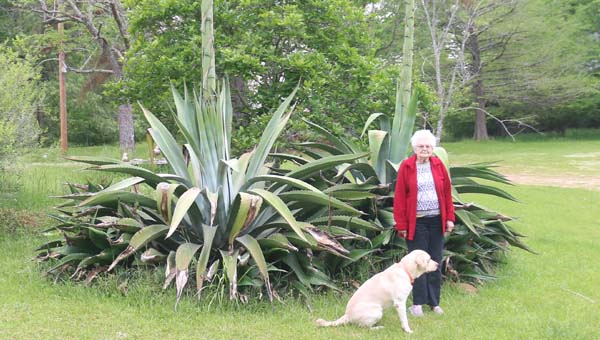 Dorothy Fleming stands next to her Agave Americana, or what some people refer to as a century plant.

Once in a lifetime: Fleming’s century plants bloom

Eighteen years ago, Dorothy Fleming bought an Agave Americana or what some people refer to as a century plant.

Since then the succulent has bloomed and died but, not before leaving behind plenty of pups that continue to proliferate in Fleming’s yard.

This spring three of those pups have reached their maturity and were in bloom.

Fleming, who drove a school bus for the Vicksburg Warren School District for 36 years before retiring four years ago, said she bought the century plant at the Cactus Farm in Edwards.

“It was just a little bitty old plant,” Fleming said, thinking back to when she first purchased it.

But once planted in her yard, it grew into what gardenia.net described as “a large evergreen perennial that forms rosettes of thick, spiny edged blue-green leaves.”

“Also, little ones (pups) started coming out around it,” Fleming said, “So then I just started setting them out in different places around the yard.”

Fleming said she had no “knowledge” of the century plant until someone told her it would only bloom once in its lifetime.

“For years it didn’t bloom,” Fleming said, which made her question whether she was given accurate information.

But then a bloom finally appeared.

“I kept watching that little thing in the center and it kept getting taller and taller and then it bloomed Fleming said, of the little plant she had purchased years earlier.

The website homeguides.sfgate.com said, “Flowers on century plants appear on a tall upright stalk that can be anywhere from five to 30 feet tall, depending on the spices and the flowers range from yellow to greenish-yellow.”

The plant kept its blooms for about two weeks, Fleming said.

“But after they died it (the stalk) fell to the ground and then the plant itself died,” she said.

Calling an Agave Americana a century plant is misleading since the blooms appear long before it turns 100.

However, it does take the plant at least 10 years before it produces a bloom.

After Fleming’s first plant died, she said, it had to be dug up with the backhoe of a tractor.

Fleming was excited she had three of her century plants bloom this year, and although she knew this meant the end for them, looking around her yard, it was evident she would have many more to take their place.

The Agave Americana is native to Mexico and there are 220 species.

It is a fair chance Fleming’s century plant is a blue agave because according to the Mississippi State Extension Center, this species performs well in the state.

WASHINGTON (AP) — In a move to send the country back toward pre-pandemic life, the Centers for Disease Control and... read more