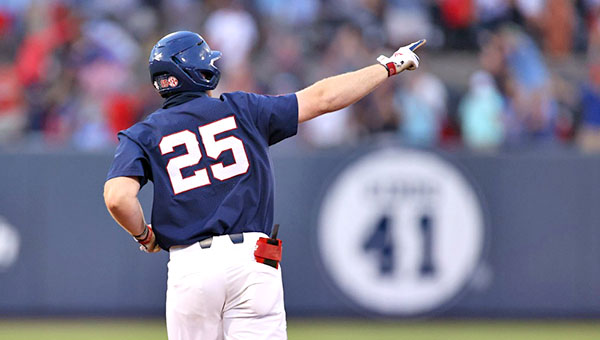 OXFORD — Another page in The Legend of Tim Elko was written Friday night.

The senior captain, playing on a torn right ACL, hit a grand slam in the third inning to break a scoreless tie, and Ole Miss rode the momentum of the hit to a 6-3 victory over Southeast Missouri State in the opening round of the NCAA Tournament’s Oxford Regional.

The grand slam was Elko’s 14th home run of the season — tied for the team lead — and fifth since he returned to the lineup on May 1. He tore his ACL in early April and has been serving as the Rebels’ designated hitter since coming back.

Ole Miss (42-19) advanced to the winners’ bracket and will play Florida State (31-22), which beat Southern Miss 5-2 earlier Friday. The Rebels and Seminoles will play Saturday at 5 p.m.

Elko was one of eight Rebels with a hit on Friday, including multi-hit nights from Kevin Graham, T.J. McCants and Cael Baker. Baker scored a team-best two runs, while McCants and Peyton Chatagnier supplied two RBIs.

On the mound, Derek Diamond turned in a solid start, allowing just two hits and one unearned run in 4 1/3 innings, which crossed after he had exited the game.

Jack Dougherty (2-2) was solid in relief, yielding two runs, one earned, on four hits while striking out four and walking none over three innings. He earned the win.

Southeast Missouri State’s Andrew Keck had two hits, including an RBI single that cut it to 4-2 in the fifth inning. He also scored on a double by Lincoln Andrews in the eighth.

Ole Miss got RBI singles from McCants in the fifth inning and Chatagnier in the sixth to lead 6-2, and was never seriously threatened in the later innings.

Southeast Missouri State ace Dylan Dodd (9-2), the Ohio Valley Conference Pitcher of the Year and a second-team All-American, went six innings and had seven strikeouts, but allowed six runs. He gave up 10 hits and three walks.

Wells passed TJ Soto (269, 1997-2000) on a two-run double in the second inning and capped his night with a grand slam in the Bulldogs’ nine-run eighth inning. He hit a two-run homer in the first inning and an RBI double in the fifth. His nine RBIs set a program record for a regional game.

The Bulldogs (41-18) tallied their fifth straight game with a double-digit hit total and advanced to a winners’ bracket matchup against No. 2 seed North Carolina State (31-17) on Saturday at 6 p.m.

Gonzaga 3, LSU 0
Alek Jacob struck out nine and gave up four hits in a complete game shutout to help Gonzaga beat LSU in the Eugene Regional.

Jacob escaped a jam in the fourth inning after giving up a leadoff triple to Dylan Crews and loading the bases, but he got stronger as the game progressed, retiring the last 13 batters he faced. Jacob entered the game with a 1.46 ERA and 47 strikeouts in his last five starts — a run that started with his no-hitter against Pepperdine on April 16.

The Bulldogs (34-17) advanced to face No. 14 overall seed and regional host Oregon Saturday night. The Ducks beat Gonzaga 10-3 in Eugene on May 18, the only time the teams faced each other during the season.

LSU (34-23) had its first opening game loss in an NCAA regional in 36 years and will face No. 4 seed Central Connecticut Saturday at 3 p.m. in an elimination game. It could be the last game for LSU coach Paul Mainieri, who announced last week he would retire after a combined 39 seasons at St. Thomas, Air Force, Notre Dame and LSU.

STARKVILLE — After one pitch Friday, Mississippi State found itself behind on the scoreboard in its NCAA regional opener against... read more