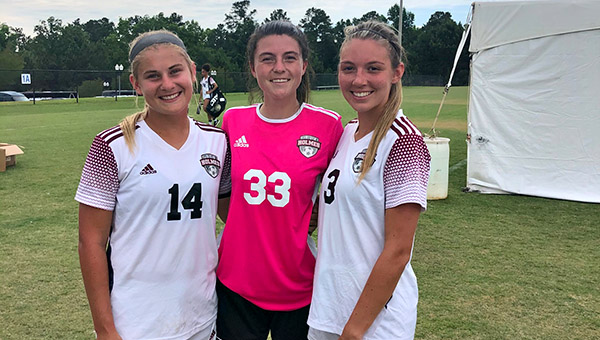 Holmes Community College soccer players Laney Smith (14), Layken Stockstill (33) and Madelyn Polk (3) pose for a photo at the NJCAA Division II women's tournament in Georgia. The three Warren Central alumni led Holmes to a 4-0 win over St. Louis Community College on Sunday, which sent the Bulldogs into the semifinals. (Submitted to The Vicksburg Post)

A pair of Mississippi teams are closing in on a head-to-head showdown for a national championship.

Cariel Ellis scored two goals for Holmes (14-0-1), Jordan Patrick had one, and Ravynne Wilson had a goal and an assist. Holmes outshot St. Louis 29-5 and scored twice in each half.

No. 6 seed Jones (14-2), meanwhile, posted its second straight shutout in the tournament and will face top-seeded Phoenix College (Arizona) Tuesday at 8 a.m.

Bekah Baugh scored all three goals in the win over CCBC Essex, including one in the fourth minute. Jones outshot CCBC Essex 27-4.

For the 21st consecutive year, The Vicksburg Post is proud to present its All-Warren County softball team, which honors the... read more