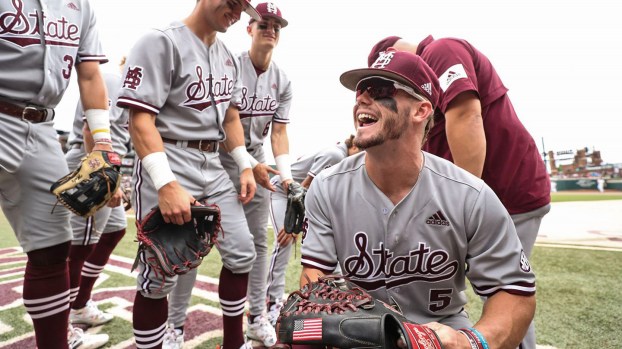 Kamren James hit a two-run home run to give Mississippi State the lead for good, Houston Harding had a career-high 10 strikeouts in five innings of relief work, and the Bulldogs edged Campbell 6-5 on Monday to win the NCAA Tournament’s Starkville Regional.

Mississippi State won a regional for the fifth consecutive season, which is tied for the fifth-longest streak in the super regional era that began in 1999. It is also the longest active streak in college baseball.

“The message all week to our guys was ‘This is where you belong. This is where Mississippi State is supposed to be,’” Mississippi State coach Chris Lemonis said. “Five years in a row being in a super regional, what an impressive run. That run is by a lot of different people. A lot of people had their hands in that. For us, we’re excited to be here. We still have work to do.”

The Bulldogs have won nine consecutive regional games since losing their opener at the 2018 Tallahassee Regional. Monday’s was among the more difficult victories of the streak to earn.

After the Bulldogs scored twice in the top of the first, Campbell (37-18) struck for three runs in the bottom of the inning — Spencer Packard hit a three-run homer — and knocked starting pitcher Jackson Fristoe out of the game after only five batters.

Harding relieved him and stabilized things long enough for Mississippi State to gain the upper hand. He allowed two runs — both scored on a single by Marcus Skundrich in the sixth inning, one batter after Harding left the game — on three hits and two walks. He kept the Camels off the board for five-plus innings.

“I’m playing my role. I just want to help the team win. I’m a team first guy,” Harding said. “I feel confident for sure to start any game or come out of the pen in any game. I think it has been a good mix this year of both. I think that has really allowed me to settle in and just do what they call me to do.”

James’ two-run home run in the fourth inning put Mississippi State ahead 4-3. Rowdey Jordan scored on a wild pitch in the fourth and Logan Tanner hit a solo homer in the fifth to pad the lead to 6-3, and then the Bulldogs had to hang on late.

Skundrich’s two-run single in the sixth inning trimmed Campbell’s deficit to one run. In the ninth inning, Lawson Harrill led off with a pinch-hit double and moved to third base on a ground out.

MSU closer Landon Sims got Big South Conference Player of the Year Zach Neto to hit a sharp grounder to shortstop, however, and Lane Forsythe fired to first for the final out.

Sims pitched three innings of scoreless relief and struck out four to earn his ninth save of the season.

The Vicksburg Post welcomes your items for the Game Plan. Submit items by email to sports@vicksburgpost.com. City tennis camp The... read more