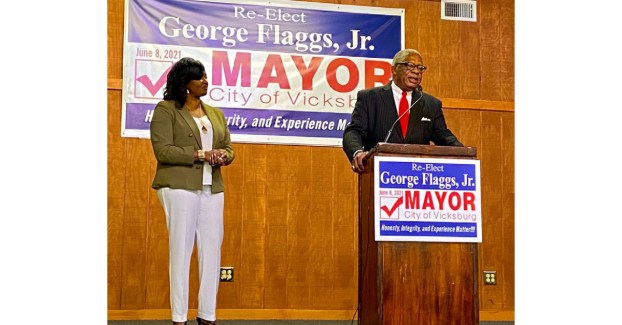 “I thank God and am honored and humbled that the citizens of Vicksburg have entrusted me to lead our city for another four years,” Flaggs said following the victory. “I think we can continue moving forward with projects like MCITy, the port expansion, and can continue to collaborate with the county government to bring more state and federal dollars to Vicksburg.”

Flaggs was in the running for mayor against fellow Independent Daryl Hollingsworth and Troy Kimble, a Democrat. As of 8:15 p.m. Tuesday night, Flaggs received 2,597 votes. Kimble came in second, with 996 votes. Hollingsworth received 240 votes.

“We did it the right way,” Kimble said in a Facebook Live address to supporters. “It’s disheartening that people say they want change, and they don’t. … We were expecting to be a lot closer in this race, and we were not, but I just thank God for this opportunity.”

There were 206 absentee ballots cast prior to election day, which will be added to the total number of votes.

“Congratulations to Mayor George Flaggs,” Hollingsworth said. “I guess Vicksburg is not ready for change.”

As far as making a fourth run for mayor is concerned, Hollingsworth said, “Ask me again in four years.”