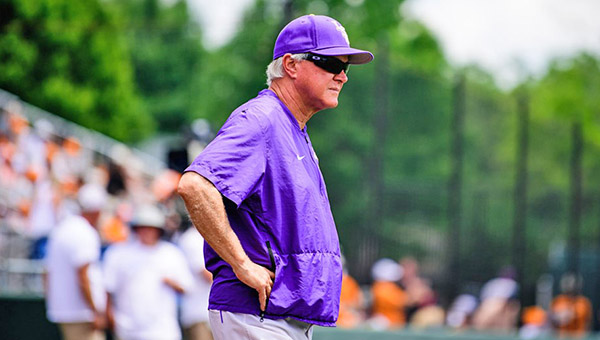 LSU baseball head coach Paul Mainieri watches near the end of Sunday's super regional game against Tennessee. Mainieri, who announced he would retire at the end of this season, coached his final game in the Tigers' 15-6 loss. (Gus Stark/LSU Athletics)

KNOXVILLE, Tenn. (AP) — Paul Mainieri couldn’t contain his emotions while his team batted in the bottom of the ninth inning Sunday.

His team down nine runs to Tennessee in Knoxville, the retiring LSU coach looked straight ahead from his spot in the dugout, swallowed hard a couple times and took off his sunglasses to wipe away tears.

When Jake Wyeth lined out to end the 15-6 loss in the NCAA super regionals and the Volunteers began to dogpile, Mainieri shook hands and shared a word with Tennessee coach Tony Vitello and headed back to the dugout for hugs with players and staff.

Mainieri choked up again in the final postgame news conference of his coaching career.

“I think I’m the luckiest guy in the world,” he said. “Thirty-nine years I got to live out a childhood dream and got to do what I wanted to do with my life. Who could ask for more? These are not tears of being upset. These are tears of happiness and gratefulness.”

Mainieri announced after the Southeastern Conference Tournament that this would be his final season. The 63-year-old coach has battled nagging neck pain and said it was time for him to step away.

He leaves as one of five coaches to win 1,500 games and a national championship. His last team finished 38-25, won four of its last five SEC series to position itself for an NCAA Tournament at-large bid and then staved off elimination four times in regionals to knock out Oregon on its home field. Tennessee swept the all-SEC super regional and went 5-0 against LSU this season.

“A lot of people didn’t expect us to get here,” Mainieri said. “We had a tough ballgame last night, one bad inning. And then today we just didn’t do what we needed to do. So we’re going to put the bats away and call it a year — in my case, call it a career.”

Asked what was going through his mind in the last inning, Mainieri said he was thinking about his father. Demie Mainieri was head coach at Miami Dade Community College for 30 years and the first junior college coach to win 1,000 games in a career.

Father and son were extremely close. A 6-year-old Paul was in the dugout when Miami Dade won the 1964 national title, and the Mainieris were the first father and son to be inducted into the American Baseball Coaches Association Hall of Fame. Demie died in 2019.

“My dad got to live a long life and got to share it with me for most of the time,” Paul said. “I miss him and I miss talking to him.”

Mainieri coached six seasons at St. Thomas, six at Air Force, 12 at Notre Dame and 15 at LSU. He amassed 1,505 wins, ranking him No. 7 all-time among Division I coaches.

His national championship at LSU came in 2009, one of five CWS appearances he made with the Tigers. He also reached the CWS once with Notre Dame.

Mainieri said he and his wife plan to remain in Baton Rouge for the rest of their lives. He said he would make himself available to the next coach to answer questions or give advice, but only if asked.

“I think we’re leaving the program in very good shape,” he said. “I feel very, very good about where the program is. And it’s been 15 wonderful years. I’ve loved every second of it. I’ll cherish it forever.”

For the 27th consecutive year, The Vicksburg Post is proud to present its All-Warren County baseball team, which honors the... read more