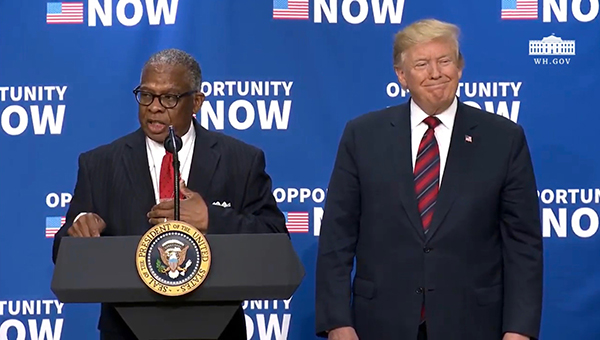 Mayor George Flaggs Jr. is pictured with President Trump during a meeting at the White House in 2018.

The rise of independent elected officials in Mississippi

Hattiesburg is, no matter how you strike it, a Democratic city.

That’s why when 39-year-old independent Toby Barker won a second term Tuesday with an astounding 85 percent of the vote against Democrat Lakeylah White, it turned heads.

“We already knew Barker was good,” said Brannon Miller, director of voter targeting for the Jackson-based political consulting firm Chism Strategies. “He was the only Republican House member with an opponent in 2015 to get a higher share of the vote than former Gov. Phil Bryant, and he beat a Democratic incumbent in 2017. But he may well be the most talented politician of his generation.”

Barker, who previously served as a Republican in the Legislature, wasn’t the only successful independent winner this week. Notably, independents unseated several prominent local officials of both major parties.

In today’s political environment rife with polarizing pandering and intense partisan bickering, what explains the appeal of these independent candidates in so many Mississippi cities?

“I don’t think there’s a Republican or Democratic way to pick up garbage or pave streets,” Barker told Mississippi Today on Wednesday. “There’s no political philosophy, in my mind, that does that one way better than another. If you care about your community and seek to take care of needs and lead everyone equitably, I think being an independent is the best way to do that.”

You’d be hard-pressed to find any Republican or Democratic elected official talk about all of their constituents — regardless of their party affiliation or race — the way Barker talks about his. And a close examination of the effects of his work in Hattiesburg the past few years could explain why he won re-election so definitively.

When he took over as mayor four years ago, the city was mired in financial reporting problems. Barker has balanced the city’s budget and begun making visible investments across the city. In 2019, he championed a 1% restaurant, hotel and motel sales tax increase to pay for upgrades to the city’s parks. That vote passed with 81% approval.

In 2019 and 2020, the city received separate million-dollar transportation grants to improve infrastructure and mobility problems. The city’s school district had previously been at risk of state takeover because of financial reporting problems, but district leadership has achieved several fiscal and academic gains recently.

As his first term wore on and wins began piling up, Barker began sensing a transformation in how Hattiesburg residents thought about their city.

“The most rewarding thing to me is seeing people from every walk of life fall in love with our city again and find a place in it,” Barker said. “From day one, it’s been about bringing everyone to the table, listening to folks, communicating, and telling our story — the good and sometimes the bad.”

Barker continued: “It’s about helping people try to find their place in where the city is going, and how we’re going to tackle our challenges together… I could sense over time that people began celebrating each other’s successes regardless of what side of the city you’re on. We’ve tried to communicate that your neighborhood is as important as mine, and every neighborhood needs to see progress.”
Flaggs, the Vicksburg mayor, said leading as an independent, not a partisan, is critical to a local government’s success.

Flaggs continued: “Politically, all Democrats are not right, all Republicans are not wrong, and vice versa.”

But as statewide politics remain one-sided as ever, there is a growing sense that the state’s local officials — led by independents who have experience building coalitions based on people and issues, not parties — could pose unique electoral problems for top statewide officials.

A glaring example of the pushback state officials saw from local officials was COVID-19 policy. As Gov. Tate Reeves struggled for consistency in issuing statewide mask mandates and business requirements, mayors set policies in their own cities.

In Oxford, Tannehill became one of the first Mississippi mayors to issue a mask mandate, before Reeves finally gave into pressure from medical experts begging for the wearing of masks to stem the quick spread of the virus. The same could be said of Barker in Hattiesburg, as well as Flaggs in Vicksburg.

After Mississippi voters decided in 2019 to remove the Constitutional provision that effectively nullified any independent candidate’s chances to serve in a statewide elected position, the prospects of an independent’s statewide success has become more enticing to consider.

“People are looking for people that represent people,” said Flaggs, who said he has “certainly prayed about” a possible 2023 statewide run. “I believe (changing the Constitution) creates an opportunity to where an independent candidate — particularly an African American candidate — can be elected at the statewide level.”

In the meantime, though, Flaggs and Barker both said they expect the rise of local level independents to continue.

“I think it started with my generation — people identifying more with causes or people rather than a set, rigid partisan ideology,” Barker said. “I think people understand that there’s a lot of gray out there. Sometimes, running as an independent, you can define yourself and define what you believe in. It allows you to have some very open conversations with people who might otherwise label you as a partisan before they even meet you.”

As for what his success and the success of other Mississippi independents means for our polarized political system today?

“It shows that even in this polarized world, there’s a way back,” Barker said. “It’s hard — it really isn’t easy because you never know what position you’ll be forced to consider because of the reality you’ve created for yourself — but we should be encouraged that there is a way back.”

For people serving as caregivers to a family member with Alzheimer’s or dementia, providing the necessary care and attention is... read more