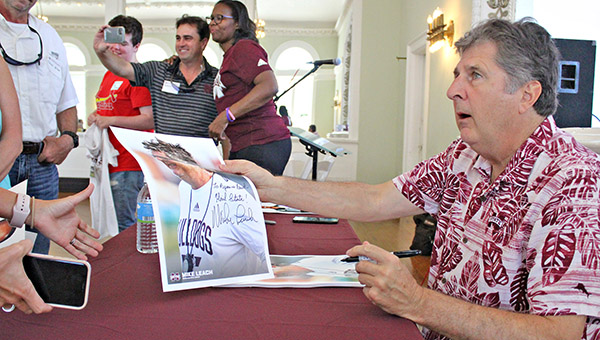 Not surprisingly, Mike Leach went a little off script.

The Mississippi State football coach, who is known for his off-kilter takes at press conferences, talked tailgating, Tommy Bahama shirts, the best food in Starkville and the philosophy behind his play calling mechanics when the Mississippi State Road Dawgs Tour made its stop at the B.B. Club in Vicksburg on Wednesday.

The Vicksburg stop was No. 7 of 8 on the weeklong tour that concluded Wednesday night in Houston, Texas. Approximately 100 people turned out to hear the two coaches and MSU’s athletic director Cohen speak, sign autographs, and greet the Bulldog faithful.

“Great folks in Meridian, Huntsville, the coast in Biloxi, we were in Tupelo yesterday, just came from Cleveland and now down here in Vicksburg. Just great Mississippi State people,” Cohen said. “You can’t get to everybody, but we look forward to these opportunities. We don’t take lightly the fact that so many of these folks are driving to Starkville for events, and it’s great to drive and come see them.”

Leach and McCray-Penson took over their respective programs last year, right around the time the COVID-19 pandemic was sinking its teeth into the country. The Road Dawgs Tour is an annual summer event that was canceled in 2020, and both coaches said it was nice to finally get around the state and meet the fans who support their teams.

“This is what it’s all about,” McCray-Penson said. “Just really thankful to the alumni association for putting this on, and our athletics department, and being able to meet and greet and just physically be in the presence of our fans and the people who do so much for our university. It’s just like we know society is getting back to normal.”

Leach said the weeklong caravan provided some joy at the end of a long road.

“I think everybody’s excited to have it. I think they’re tired of the joyless environment that COVID provides. Everybody wants to get together and get excited about things, and so it’s great to be together,” Leach said.

After Cohen and McCray-Penson spoke to this segment of Bulldog Nation, Leach made some brief remarks before turning it into a free-flowing question-and-answer session.

• His favorite restaurants in Starkville, including “Where the Food At?”

• His Hawaiian print shirt, which came from a Tommy Bahama line designed for Mississippi State that is available at bookstores in Starkville.

• The differences in the Southeastern Conference, Pac-12 and Big 12.
“The one thing with the SEC is how close everybody is,” Leach said.

• And his play call sheet, which is a small piece of paper compared to the large, laminated cards most coaches use.

They also endured a number of other issues, including several star players leaving midseason and a chronic wave of positive COVID-19 tests that forced them to play mostly freshmen and sophomores for the final few games.

“I thought we grew a lot last year. We were the youngest team in the BCS, so we played a lot of freshmen and those guys got a lot of reps,” Leach said. “You really improve a lot between your freshman and sophomore year, so we’ve had some improvement. We have to keep elevating that. We’re looking forward to a regular season where you’re on a regular routine.”

Leach added that, as the pandemic wanes, he was happy simply to have a normal offseason.

“It’s more of a relief. Thank goodness we’re starting to get on a routine. Some elements and things of the season were taken away and we’re just really grateful and optimistic that we get to get back to normal,” Leach said. “Those guys last year, as everybody was on quarantine, they were just excited to be around each other. Now everybody realizes how meaningful that can be.”

The Vicksburg Post welcomes your items for the Game Plan. Submit items by email sports@vicksburgpost.com. Please include the name and... read more