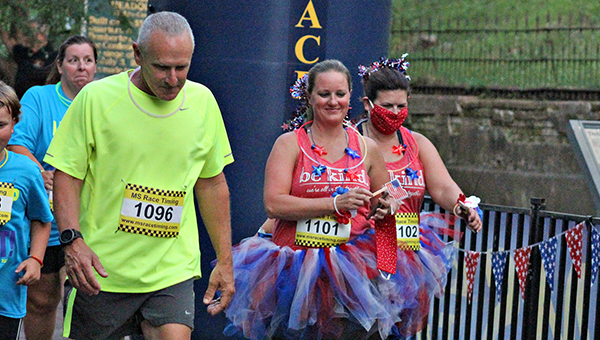 A little rain will not postpone the Star Spangled Night Run 5K, but a lot of rain and win just might.

The 5K run and race walk, scheduled for Saturday night in downtown Vicksburg, will go on as planned unless the tropical system swirling in the Gulf of Mexico develops into a named tropical storm or hurricane and brings severe weather to Vicksburg, race organizers said.

The system was still only a tropical depression as of Thursday afternoon, but is forecast to affect the Louisiana and Mississippi coasts as early as Friday. Heavy rain will be the main impact, although an upgrade to a tropical storm and heavier rain and winds is possible.

Many preliminary forecasts have had Vicksburg and the Mississippi River as a sharp dividing line between the more and less severe parts of the storm, which Star Spanged Night Run race director Stacey Mahoney said has put organizers in a wait-and-see mode.

“We’re going to be watching it, and watching it closely. You know how the weather can change, so we don’t want to be premature in postponing,” said Mahoney, who is also the director of the Southern Cultural Heritage Foundation for which the race is a fundraiser. “With the race not starting until Saturday night, I hate to make a call until Saturday. As soon as we have enough definitive information to make a call, we will.”

Mahoney stressed that whatever decision is made, the race will not be canceled. If the weather is too rough, it will be postponed to a later date, most likely in early July.

“We would not cancel it. We will postpone it. If we needed to move it, that’s what we’ll do,” she said.

If the weather cooperates, the race will go on as scheduled at 8 p.m. Saturday. The start-finish line is in front of the Southern Cultural Heritage Center at corner of Crawford and Cherry streets.

The entry fee is $35 for adults or $20 for children 12 and under. The fee includes a race T-shirt and entry to the postrace party in the Southern Cultural Heritage Foundation auditorium.

“We’re just moving along as if it’s going to happen,” Mahoney said.

The Star Spangled Night Run is the third of five major 5K and 10K running events held in Vicksburg each year, along with the Chill in the Hills in January; the Run ThruHistory in March; and the Over the River Run and Spooky Sprint in October.

Last year’s Night Run was one of the city’s — and state’s — first major public events following the onset of the COVID-19 pandemic and drew a total of 123 people.