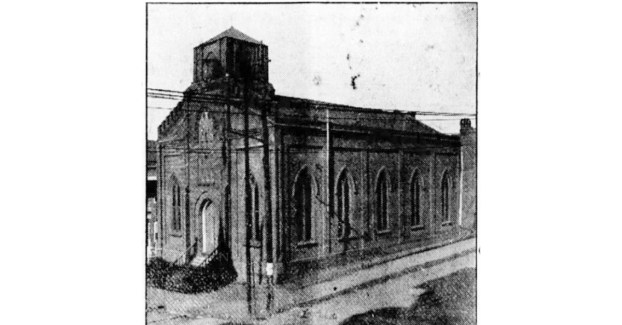 The second site of First Presbyterian Church as it appeared in the late 1800s and early 1900s.

Looking Back: The Second Home of First Presbyterian Church Vicksburg

On April 12, 1854, the cornerstone for the new Presbyterian Church on the northeast corner of Walnut and Clay streets was laid.

The congregation sold its original 1830 church on the southeast corner of Monroe and First East streets and hired Reynold Clark, carpenter, and E. Grammer, brick mason, to build the church. The cost of the land and building was listed as $15,000 in a document left in the cornerstone, which was removed in 1906 when plans were being made to lay the cornerstone for the third home of First Presbyterian on the southeast corner of Cherry and South Streets.

At the dedication of the second church on June 24, 1855, The Vicksburg Whig reported “as this edifice has been recently erected, and will be an advantage as well as an ornament to our city, it may not be inappropriate to make some reference to its size and general construction, for the benefit of friends abroad and here, who have not had an opportunity of examining it. It is a brick edifice, situate upon the corner of Clay and Walnut Streets, front West on Walnut, and is about 90 feet in length and 55 in width.

“The main body of the church or church proper contains 92 pews, capable of seating comfortably about 700 persons, and is about 75 feet in length, and about 50 in width. The pulpit or desk in the East is a rather curious design, and it is relieved, and the church ornamented, by handsome fresco painting in the rear of it and on either side. The pews of the appropriate design and well finished. There is a deep and handsome cornice around the whole room.

“The room is ventilated by an opening in the center of the ceiling. The windows are large, and the glass stained sufficiently to add to the appearance and soften the light. The tower entrance, or vestibule, is the whole width of the building, and about twenty feet in depth, with handsome stairways on either side leading to the gallery.”

The Gothic-style building was supposed to have a tower that extended many feet above, but was only finished to a short distance above the roof. According to a WPA record, the tower, when complete, was to hold a massive bell, but before it could be finished, the bell was melted down to cast ammunition for the Confederates defending Vicksburg. Other information recovered from the cornerstone was an information sheet detailing that Vicksburg “contains about 5,000 inhabitants, with a Presbyterian, Episcopal, Baptist, Methodist and Catholic church, a public male and female school, seven private schools, two Masonic lodges, an R.A. chapter, a council of R. & S. Masters, and an encampment of Knights Templar; two lodges and an encampment of I.O.O.F., a mechanics’ mutual benefit society, a Hibernian society, three fire companies, a hospital, an orphan asylum, dry goods stores, commission and produce houses, grocery store, two foundries, four sawmills, workshops, a courthouse, a city hall and a market house. During the past summer, a pestilence known as yellow fever visited here and swept off about 500 inhabitants. These deposits are made in the hope that when found by posterity they may be interesting and useful.”

When the church opened in 1855, Miss I.G. Prince opened her “Young Ladies Select School” in the basement. She offered lessons in English, French, pencil drawing, water painting, voice, piano and guitar with rates ranging from $2 to $5 per month. In 1906, the Presbyterian congregation approved plans for the new church building to be built on Cherry Street and sold the old church to E.J. Bowmer, who, on Jan. 16, 1908, advertised the organ, chandelier, pews and art glass windows for sale because he intended to demolish the old church building to make way for a “European style hotel.”

Four days later, the Elks Club building to the north of the church caught fire and, because of strong winds and misinformation as to where the fire was, thereby causing a delay in the arrival of firemen, burned to the ground.  The church building was ignited by this fire and was also a total loss. The congregation had held its last service in the building just the day before. The Hotel Vicksburg occupies the lot today.

I have never categorized myself as an environmentalist.  That’s not to say, I don’t love the planet.  As a Girl... read more